Was Asian carp near Great Lakes just a scare?

There's some good news from Illinois, where an Asian Carp was recently caught just nine miles from Lake Michigan.

In two weeks of intensive, follow-up monitoring, no bighead or silver Asian carp were found, a regional monitoring group says. 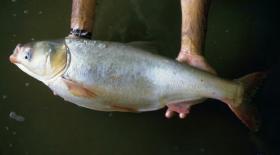 The silver carp caught June 22 below the T.J. O’Brien Lock and Dam set off a scramble among  environmentalists and officials.

They worry about the impact of the invasive Asian carp, especially the voracious, aggressive bighead and silver varieties. The fish is so worrisome that electric barriers have been installed in waterways leading to the southern tip of Lake Michigan, a potential entry point to the Great Lakes.

"The situation should be a wake-up call for agencies that have become complacent while Asian carp populations march steadily toward Lake Michigan," the group said in a statement. "Instead, it appears to be met by government agencies and administration officials with a collective yawn. ...

Meanwhile, the silver carp captured June 22 is being analyzed to determine its age and origin.