The Greater Cincinnati Native American Coalition was a last-minute addition to the city's Martin Luther King Day Celebration. Members of the group prayed and sang in their native language Monday. They may be planning a march for later this week.

A different group, American Indian Movement Chapter of Indiana & Kentucky, is holding a peace vigil Tuesday at 10:00 a.m outside the Diocese of Covington.

After a frigid Fountain Square prayer service, the Coalition's Jheri Neri said the group is staying fluid in its response to the evolving story of Covington Catholic students and a viral video that shows them standing near a Native American in Washington D.C. 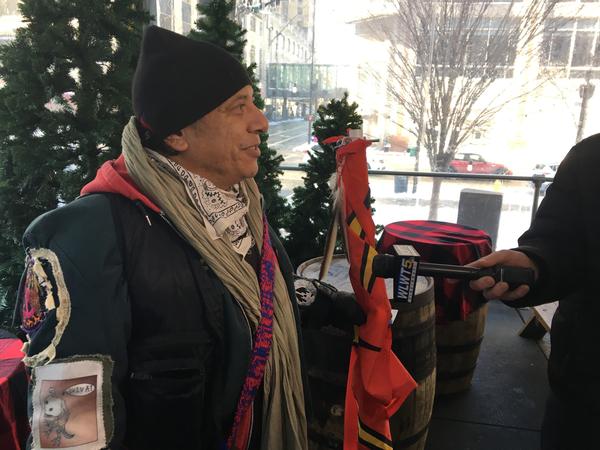 "We want to blame our children but it's not our children's fault. It's the community's fault," he says. "And when the culture completely breaks down we don't see it when we are doing it."

According to Neri, "It's unfortunate that people have made this into an 'us versus them' and into a political event. It has nothing to do with politics."

The other group, The American Indian movement, says this on its Facebook page:

This will be a peaceful vigil to confront racism.

We understand the concerns about showing up outside the school itself and have decided to switch locations to the Diocese of Covington. We have advocated non-violence and accountability for administration, teachers and chaperones this entire time. Not once have we, as an organization, threatened anyone.

We have seen the entire hour and forty-six minute video and stand by Nathan Phillips. While this longer video gives better context to the situation, it still does not absolve those boys of their behavior. Nathan Phillips is a respected elder. He stepped in to what he saw was a tense situation between the Black Hebrew Israelites, who were yelling harmful things at Natives and the school group, and the school group who were becoming increasingly worked up. He stepped in because he wanted to diffuse the situation with a song, with a blessing. The video clearly shows him stepping in between the two groups, but he does not force his way into the school group nor does he put himself in anyone’s face, as people have claimed. In the video you can see the boys approaching and surrounding him after he stops moving and that one boy steps up to face him, not the other way around. Their behavior at this point is still a problem, even if they did not create the initial situation. They are seen mocking, laughing at, and disrespecting Nathan Phillips. There are other videos from DC that same day showing these boys yelling “MAGA” and “build the wall” at random passer-bys near the Lincoln Memorial. There is a video of a student telling Native people that “land gets stolen, it’s how the world works.” These behaviors are still unacceptable.

The Columbus Women’s March is going forward as scheduled on Saturday, despite some other local Women’s March events becoming embroiled in controversy.

The removal of Jeff Sessions as attorney general has some Americans worried about the Robert Muller investigation into Russian election interference. The activist group Move On called people to action Thursday night for the Nobody Is Above the Law movement.

A few hundred protestors gathered at the Ohio Statehouse on Wednesday to rally against the Trump administration's proposal to eliminate legal protections for transgender people.

Just over half of Native Americans living on American Indian reservations or other tribal lands with a computer have access to high-speed Internet service, according to new estimates from the U.S. Census Bureau.