The iconic music and pop culture magazine Rolling Stone turned 50 last year. Next month, the Rock & Roll Hall of Fame and Museum closes its yearlong exhibit that takes music fans through the magazine's vast archives of photos and interviews.

Rolling Stone Magazine was founded in San Francisco 1967. It was a big year for music, with major releases from bands including The Beatles, The Doors, Jefferson Airplane, Pink Floyd and The Rolling Stones.

The magazine was founded by Jann Wenner.

"He was very meticulous about retaining all of the artifacts," Niesel says. "You’ll see the desk in his first office and you’ll see the roach clip that they sent out to the first subscribers as a gift. It was handmade by the guy who would become the art director of the magazine." 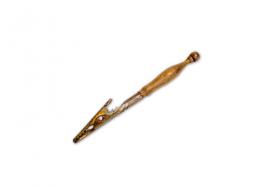 "If you’re familiar with the magazine, it became famous for the Rolling Stone interview," Niesel says. "Long-form Q&A-style interviews."

"In one section of the exhibit they have a video that they’ve created that includes 17 interviews that were done by Jan Wenner. You can hear the audio of him talking to Pete Townsend of The Who or Bob Dylan. Then they take you to the story to see how it appeared in print. I don’t know how often Bob Dylan does an interview these days so I think it’s really interesting to hear him speaking way back when."

Rolling Stone's iconic covers over the years have become increasingly provocative. They're on display in the exhibit. "They're arranged in chronological order so you can see some of the early ones and how they've changed over the years and become very elaborate," Niesel says. 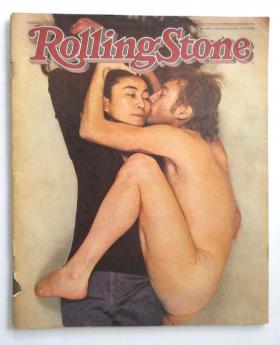 Most notable: In 1993, Janet Jackson, topless with hands from behind covering her breasts. And back to 1980, a naked John Lennon curled around Yoko Ono – one of the last photos taken of Lennon before his death.

Over the years, Rolling Stone has become known for his album and concert reviews.

Niesel references one particularly harsh John Landau concert review of the band Cream. "Eric Clapton broke the group up, famously saying, 'The ring of truth just knocked me backward. I was in a restaurant and I fainted.'"

"It goes back to a time when reviews had more of an impact. You couldn’t just go online and read 100 reviews of a record. It had a much bigger impact."

Niesel says some of Rolling Stone's most notable reviews are re-printed and featured in the exhibit.

"They’re still going to get interviews with Taylor Swift and U2 that don’t do that many interviews. So I think they still carry a certain amount of weight. And the writers there have been doing it a number of years and are a step above everybody else."

The Rock and Roll Hall of Fame announced a $9 million donation from Christopher Connor, board chair and former Sherwin-Williams chairman, and his wife Sara. According to Rock Hall CEO Greg Harris, it's the largest gift in the museum's history.

The Rock and Roll Hall of Fame has a new exhibit examining the interweaving of music and politics, just in time for the Republican National Convention.

Ohio Ranks In Top 10 For Arts And Culture Employers

For the first time, the National Endowment for the Arts and the U.S. Department of Commerce are releasing arts industry data for individual states.

For only the third time ever, the government released today a national report card examining the knowledge, understanding and abilities of U.S. eighth-graders in visual arts and music.

And in many ways, the numbers aren't great, with little progress shown in most categories since the last time the assessment was given in 2008. One bright spot: The achievement gap between Hispanic students and their white peers has narrowed. But Hispanics and African-Americans still lag far behind white and Asian eighth-graders.