Farming is an industry worth more than $100 billion in Ohio. But all the rain this summer means farmers weren't able to plant all their corn and soybean fields. And what seeds were planted are being drowned.

Ohio Farm Bureau spokesman Joe Cornely says, "The loss, or potential loss, of the corn and soybeans will be severe for the farmers that are growing it. For you and I who go to the grocery store, we probably won't even see it."

However, Cornely says if farmers don't get some kind of dry spell, we could see a big impact on the state's economy.

"Even in the larger metropolitan area of Cincinnati, (there are) lots of food-based companies so it's not going to just be a food supply and price situation. If we do see this continue and it becomes a much more widespread and deeper issue, then it's going to be an economic issue in Ohio as well," says Cornely.

He says we're past the planting date, so all farmers can do is wait and hope for a dry spell.

One bright spot, this week's crop progress report says "berry producers have enjoyed the rain, as irrigation hasn’t been necessary." 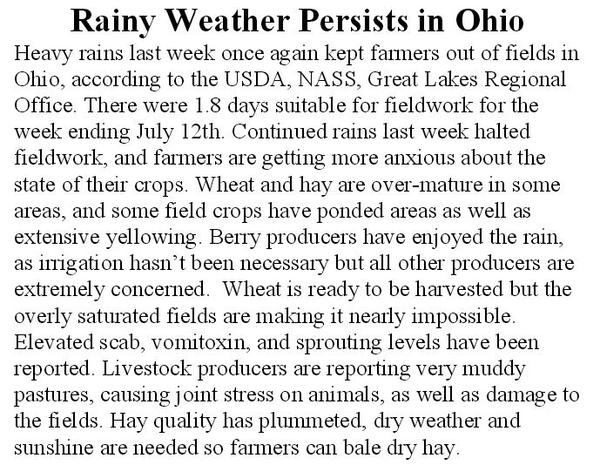 Extensive flooding and heavy rains have affected corn fields across Ohio and left growers contending with the possibility of lost or damaged crops.