Upset by continued flooding on the Lake Ontario shoreline, New York Gov. Andrew Cuomo wants to shake up the bi-national group that helps to regulate the Great Lakes. 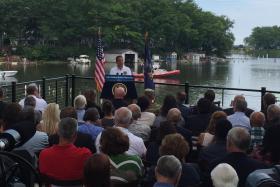 Cuomo wants President Trump to name new U.S. representatives to the commission, which has three seats for the U.S. and three for Canada. (One of the U.S. seats is vacant.)

The commission advises both federal governments on issues related to the Great Lakes and other boundary waters. It also controls outflows from dams along boundary waters.

"We're calling on President Trump to replace those appointees on the IJC, put appointees who know what they're talking about, who know the Great Lakes, and he can do that immediately," Cuomo said Thursday afternoon, as he signed legislation for flood relief.

Commissioner Lana Pollack is a former state legislator from Michigan and former president of the Michigan Environmental Council. Commissioner Rich Moy is a former land and water consultant, and has been a senior fellow at the University of Montana's Center of Natural Resources and Environmental Policy. Both were appointed by President Obama. 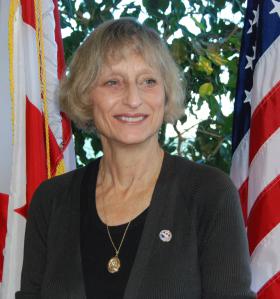 "Montana is a beautiful state," Cuomo said. "But what you know about the Great Lakes living in Montana, I'm not exactly sure. I know they go far west, but I don't think they reach Montana."

Pollack says blaming the flooding on the IJC is no more than "alternative facts".  "All of the facts line up to indicate this is about precipitation and ice conditions – it’s not about the management of the water," said Pollack.

As flooding developed -- and continued for weeks -- along Lake Ontario, Cuomo and others have criticized the IJC. They zeroed in on a new management plan for the lake.

Although experts such as the U.S. Army Corps of Engineers say that heavy spring rains led to the flooding, Cuomo and others says the commission could have done more to limit flooding. For example, critics say, more water could have been released from the Moses-Saunders hydroelectric dam, downstream from Lake Ontario.

Cuomo's appeal to President Trump to appoint new members to the IJC was unusual. 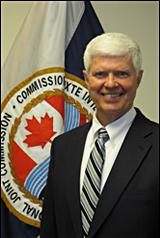 The governor, a Democrat, has criticized many of the Republican president's policies -- including those related to the environment.

For example, Cuomo was among those who blasted Trump's withdrawal from the Paris climate accord. And when Trump released a 2018 budget proposal that cut funding for the EPA and eliminated $300 million for the Great Lakes Restoration Initiative, Cuomo said the plan "puts our environment ... at risk."

As for new U.S. appointments to the IJC, Pollack says she and Moy expect to be replaced by the new administration. They’ve even sent in letters of resignation.  Pollack’s only concern is resigning before new commissioners are found.

"We would love to pass the baton to them.”