The designer of an iconic automobile has come back home to Dayton. Gale Halderman was born in Tipp City. He graduated from Bethel High School in 1950 and then attended art and design classes at the Dayton Art Institute. It may be surprising that the name behind one of America’s most popular sports cars didn’t set out to design anything like it. 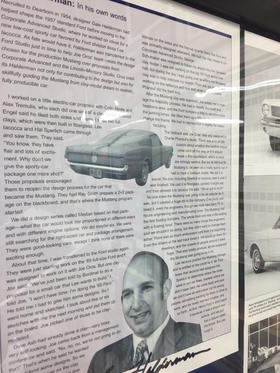 “I loved to do lettering,” he says. “I used to letter all the school buses at school when I was in school. And then I saw this class that was designing televisions and bicycles and I thought, boy does that look exciting.”

Halderman joined that class, which was taught by Read Viemeister of Yellow Springs. Viemeister founded the Department of Industrial Design at the Dayton Art Institute. He also designed the Tucker automobile.

“Guys, everything in the world is designed, but don’t overlook cars,” Halderman remembers his instructor saying.

The young student took that advice. Soon after that he took his talent, along with a portfolio of his work, to Ford Motor Company. Hired by Ford’s design team, Halderman’s first assignment was with the 1957 Ford design team. From there he was off and running.

The opportunity to design the Ford Mustang came just a few years later. 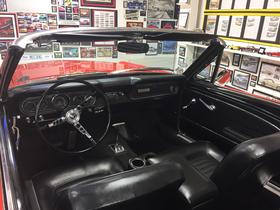 “We had a brilliant product planner named Hal Spurlich,” says Halderman, “who said there was a huge market that we didn’t have a car for, and neither did anybody, and we should think about putting it on the market.”

Halderman says Henry Ford II didn’t want any part of it, telling his crew, “That’s what they told me when we did the Edsel.” However, then Ford Vice President, Lee Iacocca, had other ideas.

“I think if we had a car that Mr. Ford liked, he’d change his mind,” Halderman remembers him saying.

“So Iacocca gave us 10 days to do a car. We worked day and night and we designed the car even though we had to do it on a Falcon body. I did one side of the car and my boss did the other side of the car,” he says. 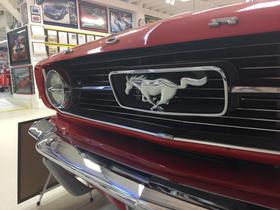 “I was the one who sketched the scoop on the side and the long-hood, short-deck proportion and that was favored by Iacocca.”

Halderman says Ford was brought over to look at the design, but he says, the carmaker was indifferent, saying simply, “I’m not approving it, but I’m not going to tell you to stop.”

And so the Mustang was born.

Well, not quite yet. Halderman says the car was at first to be called the Cougar. It was towards completion of the full design that Iacocca announced, “by the way, we’re calling it the Mustang.”

So the front emblem was changed to reflect a mustang inside a coral and the rest, it could be said, is history. 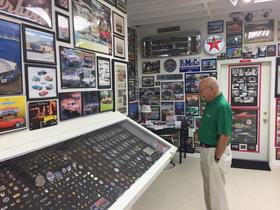 Much of that history is on display in Halderman Barn Museum in Tipp City, where Halderman lives today. The museum is an amazing space filled with thousands of mustang related artifacts, and several beautiful, red mustangs - three from the 1960’s and the latest 2018 model.

Halderman is somewhat humble about his accomplishments but admits he’s very proud of the work he did at Ford Motor Company, especially his work on the Mustang.

“It was very exciting but you know, it was a job. We had other cars to work on. We had Galaxies, we had Falcons, we had Mavericks, we had Thunderbirds, so the Mustang was just one of many at the time. So we treated it just like any other program,” he says. “Fortunately, it became an icon, but you never know. You wish they all would.”

This year, Halderman will serve as the grand marshall at the annual Concours d'Elegance at Carillon Historical Park on September 16, 2018. You can see him there, and find more information on his museum on Facebook, at Halderman Barn Museum. 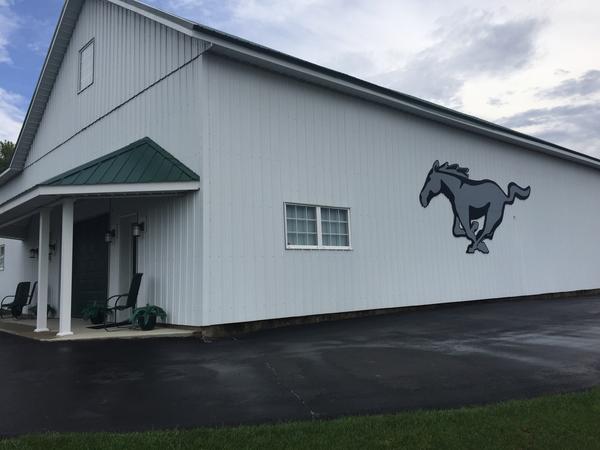 Some two million Ford F-150 pickup trucks are being recalled by the company after more than 20 reports of smoke or fire coming from the seat belts.

The recall, which was announced Thursday, applies to certain Regular Cab and SuperCrew Cab vehicles from model years 2015-18.

Trump Freezes Fuel Economy Standards; Will GM At Lordstown Run Out of Gas?

If you feel like crossing the street is more dangerous today than in years past, you may be right.

Ohio Exporters At Risk If NAFTA Talks Fail With Canada

Some of Ohio’s major exporting industries, including agriculture and automotive manufacturing, could suffer if the United States and Mexico make a trade deal without Canada.

The countries are reportedly in negotiations, trying to reach a deal on a revised North American Free Trade Agreement, or NAFTA, by Friday. However, earlier this week, President Trump said that if Canada won't sign on, the U.S. and Mexico will do their own bilateral deal.