How One Woman Escaped Sex Trafficking And Overcame Her Opioid Addiction

Jenn Glaser lay in bed with a severe pain in her right hip. In the last few days a large abscess had developed under her skin--an infection from injecting drugs.

After six years of heroin addiction, Glaser had had many of these but always managed to take care of them on her own. She avoided hospitals and the doctors who she feared would label her a “junkie.”

This time, however, the infection was serious. Glaser’s leg was swollen and the pain was so bad she couldn’t walk. But that didn’t stop her from working. Her pimp insisted she continue seeing her male clients and Glaser knew it was what she had to do to feed her addiction.  “I had to make that money,” remembers Glaser, who at the time was in the throes of heroin addiction.

Before heroin, Glaser says her life was fairly repetitive. When she wasn’t working as an assistant manager at Quiznos in Columbus, Ohio, she was busy raising her newborn son, Tristan and building a home with her son’s father, who she calls Larry. Glaser, who grew up attending private schools, knew one day she’d go to college.

Larry had an old injury and took prescription opioids like Oxycontin and Percocets, to manage the pain. One day when Glaser was home with an ear infection, Larry offered her one of his pills.  “He was like, ‘take em. Like it’ll help with your ear’,” said Glaser. “And that’s when I fell in love.”

It wasn’t long before the pills were replaced by heroin, which is cheap and easy to find. Larry assured her heroin was “basically the same thing” as the prescription pills.  “I snorted it and again…fell in love all over again,” said Glaser. “The pills just wasn’t enough. Heroin was my super drug.” 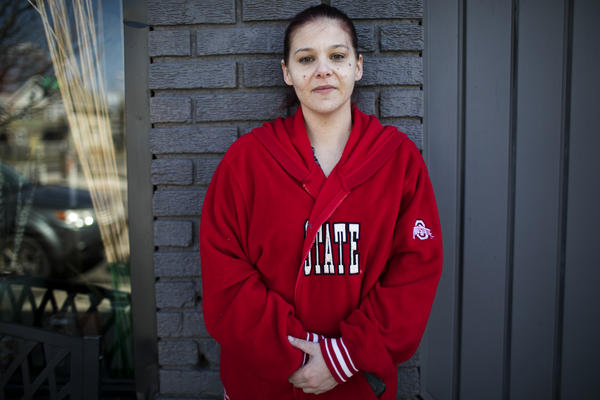 Soon Glaser couldn’t get through a shift at work without a hit of heroin and things between her and Larry deteriorated. He started drinking heavily and became physically abusive towards Glaser. One night, he threw her down the stairs and Glaser called the cops.

In retaliation Larry showed police their drugs. The next morning child services arrived at their door to take Tristan into state custody. Glaser gets choked up as she remembers watching them remove her son from his bed and leave. Losing her son filled her with a burning shame that she wanted to forget.

“I kind of used that to fuel my [addiction], like what do I have to live for?” said Glaser.

This was the moment when Glaser’s addiction really took hold. The couple was evicted from their house and then they later split up. Glaser lost her job. With nowhere to go and her parents unwilling to take her in, she turned to her sister Sherry. Sherry also struggled with heroin addiction and was soliciting sex on Parsons Avenue to afford heroin.

Parsons is one of several areas of Columbus known for sex trafficking. These areas are often dotted with abandoned homes and sparsely stocked corner stores. It’s where dozens of young women go to linger at bus stops and on street corners to sell sex.

Side Effects reporting for this story found that their work is no secret to local law enforcement or city officials, yet they are rarely mentioned among the victims of the opioid epidemic.

Glaser, who just a year earlier could have never imagined selling her body, was desperate for that next fix of heroin. She walked with her sister Sherry to a street corner and asked her to show her the ropes.  “We stood there. She got in a car. She did her business. She came back [and] showed me the money,” Glaser said.

She remembers feeling terrified but she was even more afraid of painful and agonizing heroin withdrawals. To feed her addiction, Glaser spent the next two years working the streets. She had clients who beat her. She’d go weeks without a shower. She slept in abandoned houses infested with roaches. Every dollar went to buy more heroin.

After two years, Glaser left the streets to live and work out of a motel off the interstate. That’s where she met a man she calls Chris through a drug dealer. Glaser remembers thinking he was “cute.” Eventually she came to believe that she loved him and that they were in a relationship. 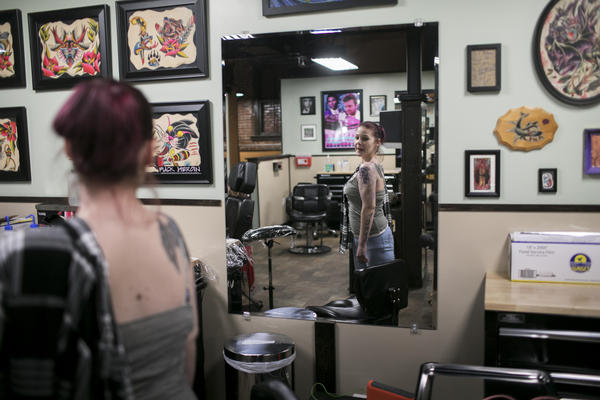 “He told me that he would take care of me,” said Glaser. “At first he didn’t want nothing. He paid for everything. But that’s the problem they suck you in and then they own you.”

Chris knew how to use websites like Backpage, which was recently outlawed, to traffick women and connect them with customers. Glaser quickly became one of several women to work for Chris. To prove it, he had her tattooed with his nickname “devil.”

For three years Chris used Backpage to arrange dates for Glaser. After each one, she handed him the money and in exchange he gave her heroin. He beat her if Glaser refused to work or tried to keep any of the money she earned. Glaser remembers it was pointless to fight back or try to leave Chris, “because I knew where it was going to go.” She would be physically abused and manipulated into believing she needed him.

Things finally changed for Glaser the day she was lying in bed with that painful infection in her leg. Sherry, who was now in recovery from addiction, came to check in on her sister and was so horrified by Glaser’s physical condition she called their mother, who called their father.

After years of estrangement, her father barged through the front door where Glaser worked and pushed passed Chris. When he found his daughter lying in bed, he broke down. “My dad is not a very emotional person. He’s not a crier. And he cried when he seen me,” said Glaser.

Doctors diagnosed Glaser with sepsis, a potentially fatal infection in the bloodstream. She nearly had her right leg amputated and spent weeks in the hospital recovering. She was later sent home with her father where she went through drug detox on the living room couch.

Glaser was free from her addiction and her pimp, but she still faced jail time for soliciting and petty theft. Instead of jail, though, she ended up in CATCH court.

CATCH, or Changing Actions to Change Habits, is a specialized court program for survivors of human trafficking. In recent years, similar models have been implemented across the U.S. with the goal to rehabilitate victims of human trafficking rather than treat them as criminals.

In Columbus, the two-year program requires participants to undergo an intense parole process. Each week they meet as a group with a judge and social worker. CATCH administrators say nearly every participant struggles with opioid addiction and are required to receive substance abuse counseling.

Glaser said CATCH taught her she wasn’t defined by her past and that she could build a life she wanted. It also showed her how she had been exploited by Chris and by her addiction. “I had a huge problem with the word victim. I didn’t consider myself a victim. I thought I did this,” said Glaser.

Glaser’s story is all too familiar to advocates against human trafficking who routinely see women who are coerced, terrorized and beaten by their pimps. Columbus agencies like the Salvation Army say in nearly all of their human trafficking cases the victims are addicted to opioids. 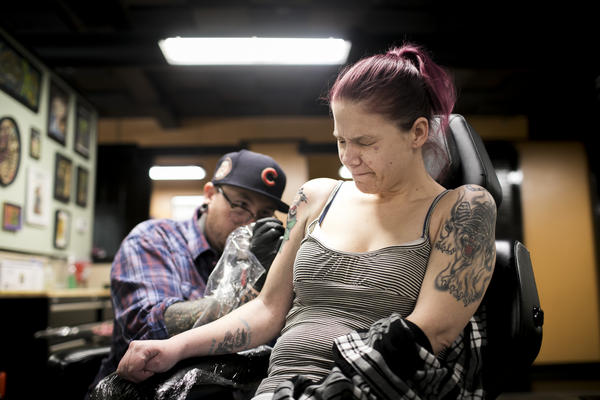 Glaser has been sober for three years and works two jobs that she got with the help of CATCH court. She lives on her own, and while she doesn’t yet have custody of her nine-year-old son, she sees him often.

Looking back, she’s angry with the men who paid her for sex. An analysis of 2016 and 2017 court records show the average for fines given to men caught soliciting in Columbus was $72 and people rarely serve jail time. Glaser thinks there should be another punishment. “It’s not fair. What makes them better?” said Glaser. “They’re doing the exact same thing that we’re doing.”

Glaser says one day she’d like to go back to school.  “I want to be independent. Eventually I want to buy a house. I just want a career. I want to be somebody,” said Glaser.

She recently got tattoos to cover her scars- a set of angel wings on each hip and a black panther to cover up the tattoos from her pimp. Glaser says she finally feels like her body is hers again. 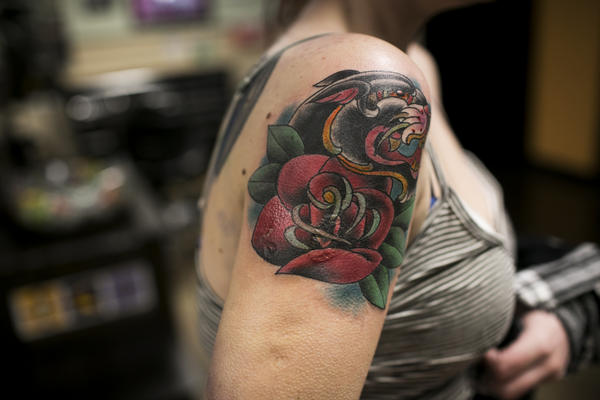 On Sullivant Avenue, A Cycle Of Heroin And Prostitution

Though the shops along Sullivant Ave. have all closed their doors for the night, a young woman walks alone down the alley behind the Seventh Day Adventist Church. She’s petite and wears lipstick, a tweed coat and blue jeans torn at the knee.

For Sex Workers Struggling With Addiction, A Safe Path To Recovery Can Be Hard To Find

In leggings and a long black hoodie, Ray walked idly up and down Sullivant Avenue in Columbus, Ohio. A block away, an elementary school had let out for the day and students walked home. For Ray, work had just started.

On a Saturday afternoon at the downtown Columbus, Ohio courthouse, close to 20 men sat in a conference room; arms crossed, eyes staring blankly ahead, listening to a lecture. One white-haired man with glasses and hearing aids yelled for the presenter to speak up.

April Zobel owns In the Bag Massage in Westerville, a small medical massage therapy clinic in a nondescript office park. A few chairs and a flat-screen television greet visitors who enter the lobby.