Though the recent rain has helped the Ohio River avert a possible harmful algal bloom, a handful of Greater Cincinnati agencies continue to monitor the river for the presence of the toxic scum-like organism that can potentially kill fish and other wildlife.

Last week when it was really hot and dry, Thomas More College Biology Professor Chris Lorentz saw the river change to a more green color, but the recent rain minimized that threat. He says algal blooms don't usually happen in rivers but one did in 2015.

"That's the million dollar question: Why that year and not previous years?" he asks. "We're not entirely sure to be quite honest. We think it's a combination of weather factors. That was a really high water summer. Water was up in July and then it dropped really quickly and got really hot and stagnant."

That year it stretched for 700 miles. At the Biology Field Station in California, Ky., that Thomas More runs, a camera hooked to a computer program monitors the water. Students at the station also take water samples. 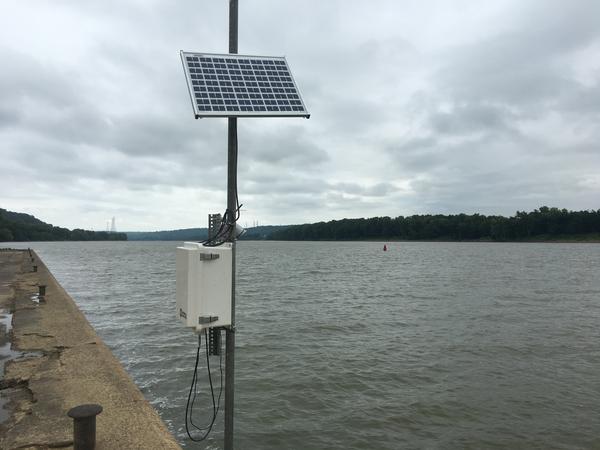 "I just kind of stick it down here in front of the camera" says senior Emily Urichich. "It has to go about a meter under water, then I'll pull it up, rinse it and preserve our sample in the lab."

Northern Kentucky University is part of the project. A computer program there analyzes the data.

There are two other cameras at Queen City River Boats in Dayton, Ky., and Harsha Lake at East Fork State Park, where there are already blooms at the lake.

After the 2015 algal bloom on the Ohio River a number of agencies decided to collaborate. They include:

Farmers are firing back at Gov. John Kasich’s executive order to implement tougher regulations on fertilizer and other farm runoff. The administration says these new requirements will help keep nutrients from polluting Lake Erie. But farmers argue this creates mandates for a problem they’re already trying to fix.

Gov. John Kasich has signed an executive order that could end up creating new regulations on fertilizer used by farms in the western basin of Lake Erie, which he says it will help stop toxic algae blooms from developing.

Smack in the middle of the Florida peninsula, Lake Okeechobee, one of the largest lakes in the U.S., has a nagging problem. Nearly every year now, large blooms of algae form in the lake.

On a recent visit, even Steve Davis, a senior ecologist with the Everglades Foundation, was surprised.

"Oh my gosh," he exclaimed, "look how thick this blue-green mat is right here."

Toxin concentrations were high only one day last week. On Friday, the Northeast Ohio Regional Sewer District detected a concentration of 10ppb (parts per billion) at Edgewater Beach. Ohio’s recreational threshold is 6ppb.

Tests from the sewer district every day since then have shown low levels.