How "Lexi" Prevents Gender Violence In Bars Across Cincinnati

In 2016, reports surfaced of women being drugged at bars near local universities. Meanwhile, another bar was getting negative attention on social media for hiring bartenders with a history of sexual assault. To Maria Cole and Kendra Massey, that meant it was time to take a nationwide program and bring it local.

Cole is a prevention specialist and Massey vice president of programming at Women Helping Women, an organization that has partnered with a City Council-led city-wide taskforce that aims to prevent gender-based violence.

Both women felt Women Helping Women was in the perfect position to initiate a training to empower bartenders, barbacks, bouncers and other bar staff to know how to spot and help those who might be in an uncomfortable situation. The training would be modeled after "Ask for Angela" or "The Angel Shot," a code originally created by the Lincolnshire Rape Crisis Support Center in the United Kingdom, then making waves through social media by giving people a way to ask for help in uncomfortable situations.

Cole and Massey called the initiative, launched in 2017, "It's On Us."

How is It’s On Us faring now, after nearly a year of national dialogue about #metoo, gender-based violence and sexual abuse?

"The national conversation has helped cement the need for the training," says Cole.

Currently, nine local bars have been trained in the It’s On Us program, and one, Queen City Radio -- which helped pilot the training -- has been re-certified. Louisa Reckman, former co-owner of Queen City Radio and current co-owner of Maize OTR, was instrumental in helping get It’s On Us off the ground from an ownership and management perspective.

"We first got MOTR on board, then Queen City Radio," says Reckman. "When I opened QCR, we wanted our bartenders to know that they were cared for and safe. Bartenders naturally protect each other. People are recognizing the training and using it."

Here's how it works: Bars place signs in all restrooms, regardless of gender, knowing that women are not the only victims of sexual abuse or uncomfortable situations. The signs tell patrons that if they feel unsafe to approach the bar and ask for "Lexi." Staff will then do what they can to help people feel safe, whether that's calling a taxi or calling the police.

The training has paid off. Reckman shares a story of a woman who was being followed by two men down Walnut Street. She stopped a bouncer at 16 Bit -- which at the time had not been trained -- and asked for Lexi. The bouncer was familiar with the program and helped the woman remove herself from the situation.

"It's becoming an industry norm," both with customers and staff alike, Massey says. In Queen City Radio’s women’s restroom, women haven written on the signs "Thank you for doing this;" "This is amazing;" and "This helped me last time I was here." 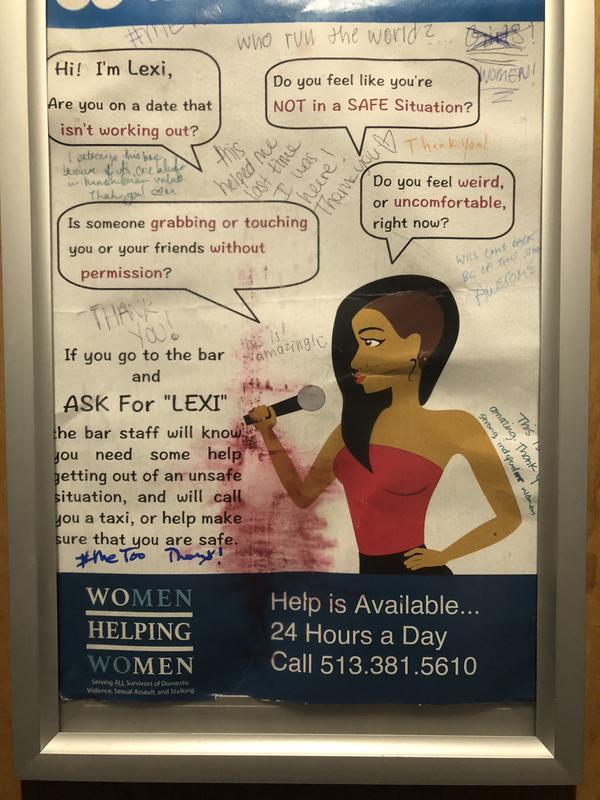 The program plans to expand, including community training for individual bartenders or staff who want to learn more about It’s On Us. They also are working with large bar groups and individual ownership to get more bars on board.

The following bars have It’s On Us certification:

The Ohio General Assembly has let the dogs out.

On Wednesday, the Ohio Senate passed a bill that would allow dogs on restaurant patios, something that business groups see as a way to let companies expand their creativity.

For One Fine-Dining Chef, Cutting Food Waste Saves The Planet And The Bottom Line

Where other chefs might see kitchen trash, Tim Ma finds treasure — for his culinary creations, and his bottom line.

Hundreds of current and past employees got a sneak peak Wednesday of "A Tale of Frisch's Big Boy" inside the original Frisch's Big Boy restaurant in Fairfax, which opened in 1939. The new museum, one section of the Mainliner, will open to the public Thursday.