The main colors remain blue and orange with navy accents. The club says the new orange and blue aim to "pop" more than the original ones.

The team will still be known as FC Cincinnati, though it is switching from the Latin American/Spanish moniker "futbol" to the more traditional English "football."

Berding says "football" was chosen over the Germanic "fussball" some expected because it's "the world's sport."

Berding says a new brand is important because the previous one represented a different time for the team.

The emblem, referred to as a "stabby lion" or "knife-y lion" by many fans, remains, but is updated to a more regal, angular design with harder lines.

"A lot of effort went into this rebrand," says Berding. "This consumed our staff this summer."

He says fans told the team they wanted to keep the lion "so we made it a little stronger, a little fiercer. It sort of represents the 'king of the jungle' and we want to be the king of MLS."

"We wanted a crest that didn't look like anything else in the MLS," says the company. The crest shape is pulled from architectural elements around the city, as well as the traditional panel of a soccer ball.

"I think the new logo and the new brand captures the best of our old logo and what we were so successful with, but I think it's even better now," says Majority Owner Carl Lindner III. "The cool thing about the logo is that every aspect of the logo has some meaning." 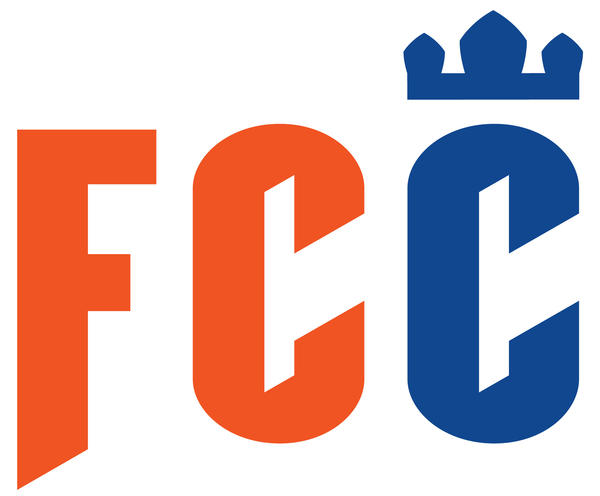 More About The New Logos

The new FC Cincinnati crest was developed as a representative of the city. Inspired by Cincinnati – itself a city on the rise – the crest highlights the region’s German heritage in a modern manner.

The winged lion has been carried over and has taken a more prominent place on the shield. It is bolder, stronger and ready for battle. It represents the club’s winning spirit, while its crown pays homage to the Queen City.

The seven points on the lion’s mane represent the seven hills of Cincinnati, while the wings’ three feathers highlight the club’s three-year journey to MLS. Curved into a “C”, the lion’s tail is another nod to Cincinnati.

Featuring the club’s two new primary colors, the crest also introduces the accent dark blue and it helps provide emphasis against the white background to further emphasize the word “Cincinnati.”

The team’s new wordmark is a familiar update on the team’s original mark. Still an orange and blue combination on FC Cincinnati, the crown remains firmly affixed atop the “C” in Cincinnati – again, a nod to the Queen City. Written straight out with no breaks or punctuation between letters, the FC moves straight into Cincinnati to show the club’s direct connection to the city.

The club’s new secondary mark is the stylized FCC from the full wordmark, while stand-alone tertiary elements will eventually include the full lion from the crest, the lion’s head and mane, and the crown. Those elements will be introduced more prominently in future years as the brand gains traction in the marketplace.

Want to see a large scale version of the new crest? Maybe take a selfie with it? Here's where to find the "Ignite and Unite Tour" this week and possibly score some freebies:

Fans will finally get to see what FC Cincinnati will look like as the team heads to Major League Soccer next year. The soccer club unveils its new branding during an invitation-only event Monday at 6 p.m.

Major League Soccer has made it official – Cincinnati is getting an expansion team. And Morgan Hughes, a leader of the #SaveTheCrew movement, is actually heartened by the news.

How FC Cincinnati, Jeff Berding and Carl Lindner III Got Everything They Wanted

Raise your hand if you ever, for a second, believed that FC Cincinnati really wanted to put a soccer stadium in the cramped quarters of Oakley.

OK, now raise your hand if you believed in the fairytale of sticking a Major League Soccer (MLS) stadium in the middle of Newport. FC Kentucky, anyone?

Major League Soccer To Cincinnati: You're In

After months of political wrangling to get a stadium plan in place, Major League Soccer (MLS) is finally saying those sweet words fans have been waiting for: you're in.