On a Saturday afternoon at the downtown Columbus, Ohio courthouse, close to 20 men sat in a conference room; arms crossed, eyes staring blankly ahead, listening to a lecture. One white-haired man with glasses and hearing aids yelled for the presenter to speak up.

The presenter, Chris Stollar, an advocate from an anti-human trafficking organization, stood before his Powerpoint, grasping for engagement.

“Coercion..." he asked. "Does anyone know what coercion might mean?"

There was a long pause. A middle-aged bald man in a dress shirt gave a loose definition.

“It means they don’t have a choice,” he said.

Another hand goes up. The participant said he’s never heard of the word.

This is John School. Everyone here was caught purchasing sex from a prostitute. Consequently, some were ordered here by a judge, while others struck a deal to come in exchange for a reduced sentence.

Many have fallen for the misconception that women enjoy sex work. Today, they’re learning the reality: 90 percent of women in sex work are forced into it as victims of human trafficking.

In Columbus, law enforcement has seen an increase in prostitution arrests. Many believe the rise is due to the opioid epidemic. While helping women get into treatment is one way to address the problem of prostitution, Columbus, like many cities, is also trying to curb the demand for sex work.

There are generally two schools of thought about what works. Educational programs such as John School, put on by the Columbus City Attorneys Office, are in use around the country. But some advocates and law enforcement think it’s not enough to deter men from purchasing sex. They support harsher penalties for offenders instead.

At John School, the attendees hear directly from survivors of human trafficking. After a long lunch break, Jenn Glaser stood before the room. She’s in recovery from a heroin addiction and has been off the street for two years. It’s her first time speaking at John School and it’s an intimidating crowd.

Glaser was trafficked by a man she thought was her boyfriend. He set up the ads on online classifieds site Backpage while Glaser met buyers at a hotel. In exchange, he supplied her with heroin. If she refused to work, he beat her. She nearly died before she managed to escape.

What she wants these men to know is that the women they went to for pleasure were living in a nightmare.

“If you’re out there looking for love, it’s not going to happen,” she said. “I told you anything you wanted to hear, just so I could get that money. That’s all it was about.”

The day-long class also features a session with a relationship counselor and some gruesome slides on sexually transmitted diseases. Organizers hope what the men learn at John School will discourage them from ever purchasing sex again. But while studies done on particular programs suggest John School can reduce recidivism, researcher Alex Trouteaud with advocacy group Demand Abolition said programs around the country vary, and the jury’s still out on how effective they are.

The Costs Of An Arrest

What is proven to work, he said, is the shame and embarrassment of getting arrested. Research shows that alone can reduce recidivism by 70 percent.

“In my mind anything else you get on top of [arrests] is gravy,” he said. “The key is: are you actually making the arrests?”

But making the arrests takes time and resources.

To catch a sex buyer takes seven to 10 officers, according to Ron Kemmerling, commander of the vice unit with the Columbus police. In his efforts to keep up with the rising demand for sex work, Kemmerling arranges "reverse stings" in hotels on the streets on a near daily basis. In these stings, a female officer poses as a prostitute, while several more officers stand by as backup to ensure her safety.

It’s a labor-intensive undertaking, but Kemmerling said a buyer will inevitably come circling “like a shark.”

In contrast, it only takes one or two officers to arrest a prostitute, which is one reason the number of prostitution arrests still dwarfs the number of sex buyer arrests in Columbus.

Kemmerling said the cost of reverse sting operations may be greater than the penalty. Columbus laws allow a fine of up to $1,000 and 30 days in jail, but few men do any time. An analysis of 2016 and 2017 court records shows the average for fines given to men caught soliciting was $72.

Kemmerling thinks this needs to change.

“Personally, I wonder about priorities when a traffic fine costs more than picking up women for sex in Columbus,” he said.

Ohio Representative Adam Miller has introduced a bill that would impose a fine of up to  $2,000, with half of all proceeds going to a fund to help victims of human trafficking.  Opponents to this bill point out that prostitutes, and johns both receive the same charge under Ohio law: soliciting. Any fine could apply to both parties, and that could be detrimental for victims of human trafficking, many of whom live in poverty. Policy expert Alex Trouteaud says rewriting the law so that it distinguishes between sex buyers and sellers, should be the first priority. However, he says how the fines get used is more important than the fine amount itself.

“We find that one of the best ways to ensure that judges impose those fines is through the kind of transparency you get with a dedicated fund,” he said.

Trouteaud said fines are important for holding sex buyers accountable. They not only do harm to the individuals they purchase, but to the communities they frequent and arresting them takes away resources from police. The money can be used to pay for educational programs like John School, and, more importantly, resources for victims of human trafficking.

“That’s just part of what the buyer needs to do to make right some of his wrongs,” said Trouteaud.

More Than One Solution

When it comes to deterring men from purchasing sex in the first place, Trouteaud says that requires a multipronged approach, similar to how communities approached the problem of drunk driving years ago. If sex buyers knew they could face a financial penalty coupled with legal and personal repercussion (like being denied a job or admission to a university), they would be less likely to offend. 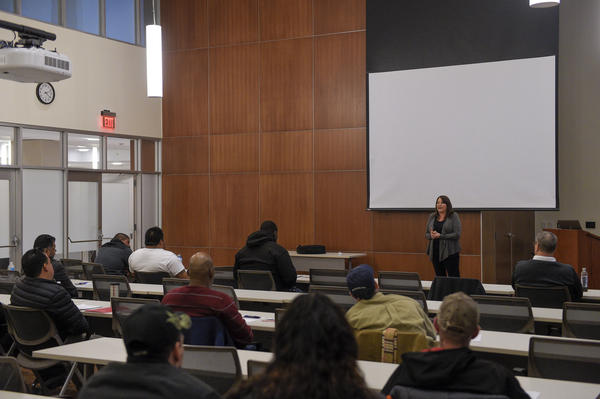 Of course, those with the most at stake here are sex trafficking victims. Valerie is also survivor of human trafficking and speaks regularly at John School. She asked that we not use her full name. She doesn’t want information about her past to harm her chances of getting a job. She said she thinks John School alone is more effective than any jail time or fine.

“I think it’s a sickness,” said Valerie of the men in John School. “I think that they’re spiritually bankrupt. They got a hole and they‘re looking to fill it somehow. There’s underlying issues with this.”

If John School is their chance to reflect and learn from their mistakes, Valerie hopes they’ll take it.

Editor's note: This story was updated to include the average fine for soliciting in 2016 and 2017. An earlier version included only 2017 numbers.

This story was produced by Side Effects Public Media, a reporting collaborative focused on public health.

For Sex Workers Struggling With Addiction, A Safe Path To Recovery Can Be Hard To Find

In leggings and a long black hoodie, Ray walked idly up and down Sullivant Avenue in Columbus, Ohio. A block away, an elementary school had let out for the day and students walked home. For Ray, work had just started.

On Sullivant Avenue, A Cycle Of Heroin And Prostitution

Though the shops along Sullivant Ave. have all closed their doors for the night, a young woman walks alone down the alley behind the Seventh Day Adventist Church. She’s petite and wears lipstick, a tweed coat and blue jeans torn at the knee.

April Zobel owns In the Bag Massage in Westerville, a small medical massage therapy clinic in a nondescript office park. A few chairs and a flat-screen television greet visitors who enter the lobby.

The city of Columbus is making strides in staffing up its police department, as the city continues to see a record number of homicides. Mayor Andrew Ginther announced on Wednesday that the city plans to add 30 additional police recruits to its 2018 recruit classes.

Columbus Police Struggling To Keep Up With City's Growing Population

Columbus saw its deadliest year yet in 2017, with 143 homicides, a record that was last broken in the midst of the cocaine epidemic a quarter-century ago.

Columbus Police Chief Kim Jacobs says it's not just the opioid epidemic that's to blame for the rising number of deaths – it's also that the number of of police is far short of where it should be. The numbers back her up: Columbus lags behind comparable cities in the size of its police force, and the department is struggling as a result.