It includes 130 works from 33 artists depicting the African-American experience through a child's lens.

Curator of Exhibitions Jason Shaiman says it's more than art for art's sake. African-American authors and illustrators have been marginalized for far too long, he says.

"This is bringing a social justice component," Shaiman says. "We're trying to bring greater attention to their contributions in children's literature, but also to telling African-American stories, which are part of the American story." 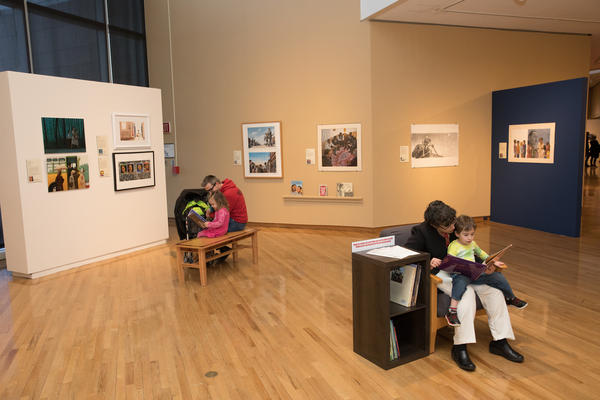 The art represents themes ranging from African origins and slavery to the Harlem Renaissance and the Civil Rights Movement.

The art in children's books is important because kids learn a lot about historical concepts from picture books, Shaiman says. African-American children grow up hearing many of the stories in the exhibit or about the people in the books, "but most kids who are not African-American only know the Dr. Kings, The Rosa Parks, the Harriet Tubmans."

To that end, the exhibit includes each of the books from which the illustrations originate so visitors can read them if they're unfamiliar with a title.

Various educational events are planned during the exhibit's run. A two-day conference "devoted to dialogue" on exhibit themes and topics is set for April 20-21. Illustrators whose works are featured in the show are slated to participate.

Telling a People's Story: African-American Children's Illustrated Literature is free and open to the public. It runs through June 30.

The Cleveland Museum of Art has announced a new outreach program to help those in underrepresented communities gain experience in the museum field.

Hanif Abdurraqib, the author of the acclaimed essay collection They Can’t Kill Us Until They Kill Us, announced a two-book deal with Random House last month. But the vote of confidence from a major New York City-based publisher hasn’t lessened his dedication for his home city of Columbus.

When was the last time you picked up a book and really looked at how it was made: the typeface, the feel of the paper, the way the words look on the page? Today, when people can read on their phones, some books never even make it to paper.

Once, bookmaking was an art as refined and distinct as the writing it presents. And in some places, like Larkspur Press in Kentucky, it still is.