Dayton Residents Come Together At The Longest Table | WOSU Radio

Dayton Residents Come Together At The Longest Table

This fall, people from all over the Dayton region came together to for the second annual Longest Table event. Organized by UpDayton, the Third Street Bridge downtown is blocked off to traffic and turned into a community dinner party open to the public, and Community Voices reporter Renee Wilde went to break bread with fellow Daytonians.

It’s a beautiful fall afternoon and the Third Street Bridge spanning the Miami River in Downtown Dayton is lined end to end with long, white, folding tables and chairs, ready for the crowd of people gathered at the far end of the bridge.

The Longest Table Event started three years ago in Tallahassee, as a way to strengthen relationships across diverse communities. The city won a John S and James L Knight Foundation Award for their efforts. Since then other cities have adopted the annual event as a way for different neighborhoods to come together.

Dayton's second Longest Table meal has drawn residents who are both newly relocated to the city, and long-time Daytonians. 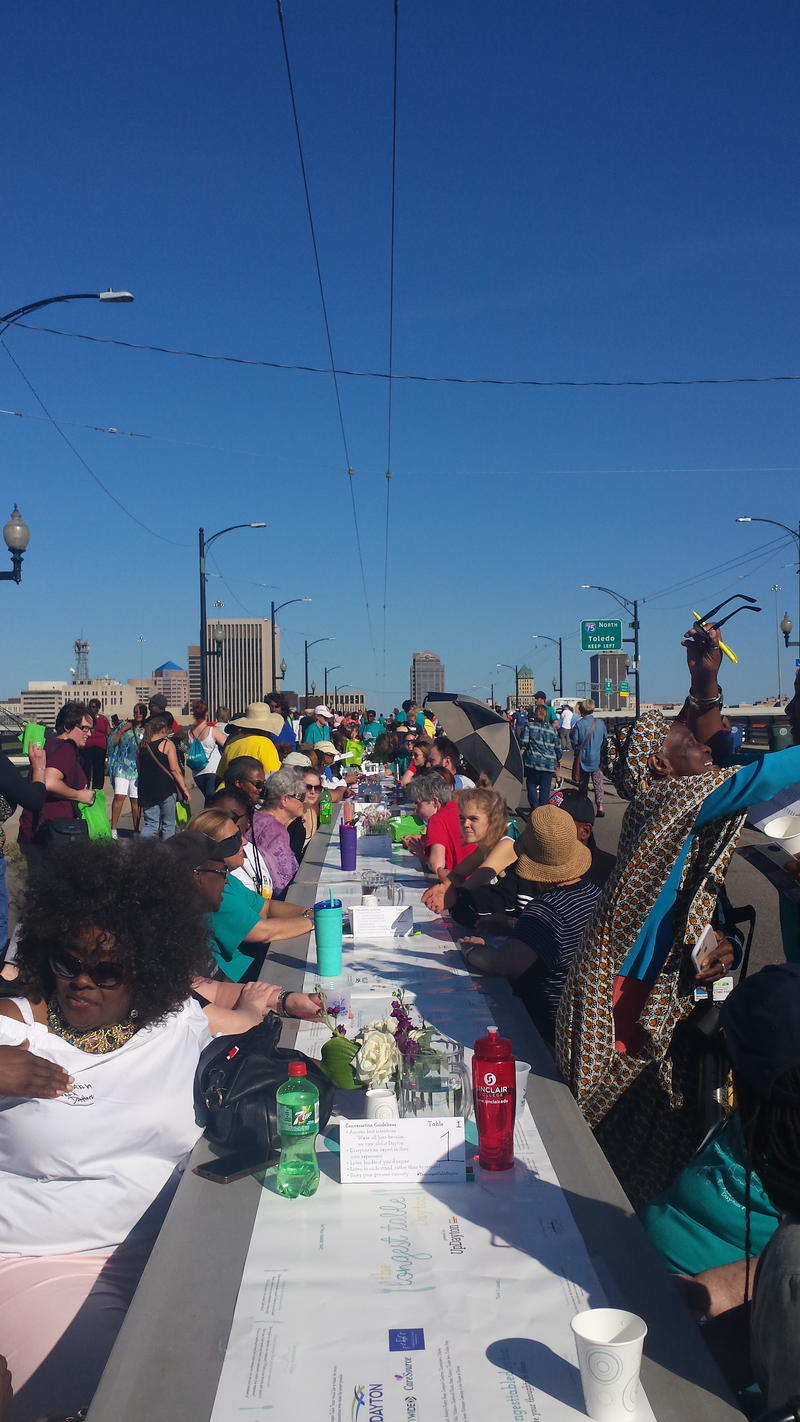 One of the main topics of conversation people were having around the tables was the revitalization of Downtown Dayton and its surrounding areas.

“I wish that in my community people would take pride in their property. Not litter, not put things out on the street,” said one attendee.

“I’m glad Dayton’s coming back to life, their trying to fix up downtown and bringing people together with the baseball field and a lot of other things that they’re trying to do. So I’m really, really happy about that,” said another.

But, there was one person I talked to who couldn’t wait to graduate high school in 2020 and leave Dayton behind.

“I been here for most of my life, but yeah it’s good so far. Plan on leaving though.”

The event’s organizer UpDayton has gone on to host smaller monthly meals in community centers all around the area. Organizers hope that by continuing to bring people together from all over Dayton, it will challenge residents to re-think their assumptions about other neighborhoods and build stronger community ties.

“We brought people together to have conversations," said the organizers in a speech to the crowd. "And in times like this, where our nation can feel kind of divided, it’s really easy to get behind a keyboard and complain. But this right here, this is community building. And I want you all to give yourselves a round of applause for coming together because you care about our community."

Is the spirit of innovation still alive and well in the Miami Valley –– who benefits, and what do you want the future to look like?

Culture Couch is our occasional series on the arts, made possible by a generous grant from the Ohio Arts Council.

Dayton’s Dia de los Muertos celebration is this Sunday, October 29. The Day of the Dead is a Mexican Holiday that has its roots in Aztec rituals that honored the dead.  Today, it’s celebrated in countries around the globe. Here in Dayton, there’s a parade, Mexican songs and dancing, and lots of altars designed to lead the spirits of lost loved ones back home.

It promises to be a good time for both the dead and the living.

Entrepreneurs looking to start food-based businesses in the Miami Valley will soon have the opportunity to create and test their recipes in Fairborn. City officials Wednesday announced a new initiative to support small business entrepreneurs with a shared kitchen and office space incubator.

Two Decades Later, Success For Man Who Imagined Turning His Life Around

In 1995, 22-year-old Steven Mallory imagined a life completely unlike his own — one without gangs, drugs and welfare dependency. He imagined having a solid family and savings.

But in Dayton, Ohio, he had a job literally doing the city's dirty work: cleaning up after the garbage trucks dumped their load at the county incinerator.

He had been a fast-living teenage drug dealer, making about $500 or $600 a day. Given to fancy cars and expensive suits, he had been known on the streets of West Dayton as Monte Carlos.