Today on WYSO Curious, Community Voices producer Jonathan Platt takes a trip to Fairborn, Ohio in northwest Greene County, for a quick history lesson about how the town got its name.

There is only one Fairborn in the United States and it is right here in Greene County, but that is not as bizarre as the history of how it got its name.  Fairborn is the conflation of two different town names - Fairfield and Osborn.  The “fair” and the “born” eventually merged together.  And unlike false origins such as Fairborn is just airborne without the “f” and the "e", two towns spent years of living apart before succumbing as one community.

At the town's senior center, Fairborn Historical Society events coordinator Marti Riddle is giving a pitch for one of the floats to appear in this year’s Fourth of July parade.  She spreads out pictures of Victorian homes that appear to be on wheels.

“This picture shows [a house] being pulled by the tractor.  This picture was an advertisement in the newspaper we found out and so it’s a big picture it says ‘The town that packed up and moved destined to be one of the leading towns of the Miami Valley,'" she says in her presentation.

Unfortunately, Osborne did not become a town of distinction and recognition in the Miami Valley.  However, very few towns can claim that they physically moved, house by house, to another location- a location that was out of the way of the flood plain when the Miami Conservancy District built the Huffman dam, one of five dams built in the Miami Valley after the Dayton flood of 1913.

Osborn was condemned to make way for the dam and its flood plain. But the citizens' allegiance to the town was such that, rather than leave, they moved the town.  Many business leaders and community officials, including the mayor of Osborne (whose house was photographed on wheels and on prominent display during this year's Fourth of July parade), were responsible for moving over 300 houses, a church and a hardware store on wheels to the neighboring town of Fairfield between 1917-1926. Community Leaders created the Osborn Moving Company, and a special rigging crew from Iowa helped with the endeavor.  A team of horses pulled the houses from the foundation, and tractors did the mile and a half tow down route 235 to Fairfield. 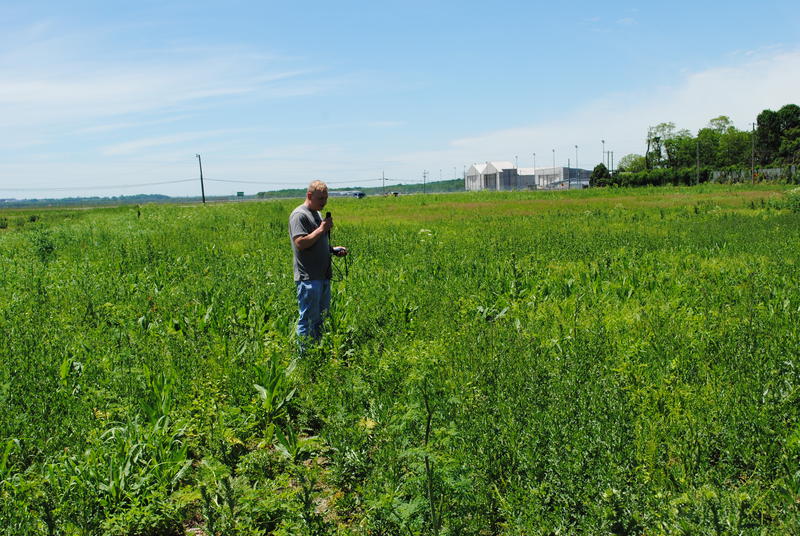 Historian Ryan Riffle stands in front of the Skyborn Theater and Skateland Park.  Both establishments are abandoned with weeds overtaking the asphalt.  Riffle points over to Haddix Road, a stone throws from the banks of the Mad River.

“That’s how you enter Osborn.”

We cross the street, and he shows me a limestone foundation, “This is one of the alleyways and, of course, there were several roads that lead you in as well.”

Riffle re-iterated several times that not everyone had a car but everyone did have a buggy.

“They would have alleyways behind all the yards because back then you had horse and buggy. So you had a barn. and you kept your buggy in there.”  He indicated how the houses lined up to one another in this vast barren field, “So a lot of the time you had a long yard with an alleyway, and Osborn had a lot of those.”

Nearly six football fields long, it is hard to imagine this windy prairie field was once aligned with rows of alley ways and streets, large Victorian homes, five churches, and a downtown with dozens of businesses that included a manufacturer of the buggy whip.

After a quick drive back to new Osborn, or known presently as downtown Fairborn, I met with Mary Pacinda, another member of the Fairborn Historical Society.  We stood in front of the Public Library on the corner of Central and Main.  There we could see the houses that once made the town of Osborn.

“I wonder how many people think its odd that in the middle of Fairborn, which is basically a blue collar town, there’s all these humongous houses in this general area here. How come? Where did they come from? Who had the money to build them?  They don’t fit with this part of the town," says Pacinda.

Osborn and Fairfield remained side by side for 30 years - they even had two separate mayors- before they merged into the name Fairborn in 1959.

“If you ever moved into a small town you are always a stranger. And that’s the way Osborn was to Fairfield," says Pacinda.  "It was the stranger that moved into town.  So they were none too happy when the merger happened.  Osborn had more votes, and they were able to force the issue.  And I remember when I was working for the post office here in Fairborn in 1968 almost 20 years afterward, there was still animosity between the two towns and a lot of resentment from the old Fairfield people.”

The Osborn-Fairfield rivalry appears to have abated, with a morphed town, Fairborn, taking its place.   But historians are making sure this story remains accessible and relevant. The National Park Service just received a grant to preserve the land where old Osborn sat in the National Registry of Historic Homes, and the Air Force is providing state-of-the-art survey technology to get a clearer understanding of what still remains in the lost town of Osborn.

Why Do Gas Prices Fluctuate So Much? WYSO Curious Investigates

Experts are warning we could see major spikes in the price of gasoline after Tropical Storm Harvey disrupted Texas Gulf Coast production. But gas prices tend to fluctuate even during times of relative calm -- WYSO Listener Chris Longo was wondering why that is?

Curious Cbus: Why Was Clinton Township Never Fully Annexed Into The City?

This story is part of the Curious Cbus project. You ask the questions, you vote for one of the questions and we answer.

This story is part of the Curious Cbus project. You ask the questions, you vote for one of the questions and we answer.