This year, Clark County celebrates its bicentennial. But some of the county’s farms are even older than that. In fact, Clark County is home to seven farms that are more than 200 years old.

In this story, we visit one these original homesteads: The Wallace Family Farm in Medway, where Wallace descendants have saved generations of personal family records. And today the meticulous archives offer a unique window into Clark County and American history.

As soon as you meet Don Wallace, it quickly becomes apparent that this 81-year-old Clark County native is passionate about his family history.

Walking through the door of the beautiful 215-year-old Wallace farmhouse in Medway, Don points out the history contained within its walls, beginning with the room where he was born 81 years ago.

Don says he left his childhood home to pursue a career in public health. After 50 years of being off the farm, he returned with his wife to retire on this property that has been in his family for five generations. 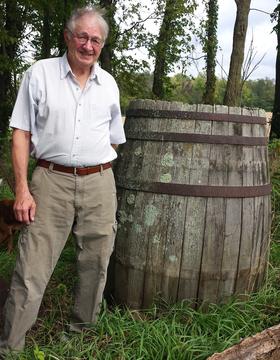 As we tour the 1901 property, the memories come flooding back to him.

“This room was always the birthing room,” Don says, standing in the front corner bedroom, “but the other thing about this room goes back to an early memory of my grandfather, who died in 1939. At that time I would have only been a year and a half old, but in this room he was laid out for viewing.”

The Wallace family has been recording their history in Clark County since the late 1700s.

In fact, they were so good at keeping the physical momentos of their lives that when Don’s mother Milly donated their accumulated history to the Wright State University Special Collections and Archives, the Wallaces' letters, photos, deeds and records took up 1,600 linear feet, which amounts to around 15 shelves in the library’s stacks.

Since Don’s been back on the farm he’s continued to uncover pieces of his family's past.

We walk out to the barn where he shows me his latest finds.

Don points to initials carved into the cement floor.

There’s another inscription at the base of the barn wall comemorating a day that Don remembers clearly: December 7, 1941, the day of the Japanese attack on Pearl Harbor.

On that day, he says, one of the farmhands came into the house with the news.

“It’s just so fascinating to find that," Don says, “and I didn’t know it was here. I had never seen it.”

One of Don’s most treasured finds is his mother’s diary from 1939, which he found in the barn last year.

In the pages of the small green book, his mother’s handwriting gives a candid account of his grandfather’s death at 79 years old.

Don reads a passage out loud.

Dawne Dewey, head of Special Collections and Archives, says the Wallace archives was one of the first projects she worked on after coming to Wright State.

The Wallace family kept everything,  she says, and their vast collection of personal items is an important record of United States history. 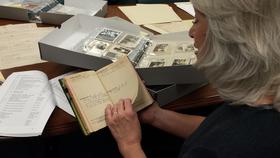 Dawne teaches a graduate course in local history research and says she often taps into the collection of this Clark County family with her students.

“Things that date to the 1790s with the original settlers here in the Wallace family,” Dawne says, ”all the way up to Don Wallace's experiences in Vietnam, in medicine. So it is just such an extensive, thorough look at American life, and that’s what makes it so special. Those things in the boxes represent stories, hundreds and hundreds of them. And that’s what’s so great about this collection,” she says.

When I ask Dawne if she has a favorite piece of Wallace family memorabilia, she quotes from a small autograph album of Anna Wallace.

“She talks about writing something in, “this thy second memory’. And I love that second-memory phrase because this whole archives is second memory," she says.

"We have those first-person memories that happen to us but the diaries, the letters, the photographs, are our second memory. They help us remember all that stuff. Milly made sure when she gathered all this stuff together and brought it out here so many years ago, that the memories of her family and everything they did would be preserved for the future,” she says.

As Clark County marks its bicentennial, she hopes more people from around the Miami Valley will visit the Wallace Family Archives in person and experience Ohio farm history through one family’s artifacts.

Some Clark County residents are pushing back against a proposed mining project in Mad River Township. Opposition to the project has been growing louder after company Enon Sand and Gravel announced plans for the quarry project last year.

On a farm in Greene County’s agricultural countryside, the shared vision of a pair of retired school teachers is changing back the landscape, by creating a welcome habitat for both agriculture and nature.

Tariff Troubles: Ohio Farmers Have Lots Of Crops But Nowhere To Sell Them

It’s a rare event for a great growing season to stress out a farmer, but that’s exactly what’s happening across much of Ohio. This fall has brought a harvest that’s huge on yields but short on buyers.