Cincinnati, Dayton Mayors Strike A Friendship And Start A Movement

As someone who grew up in Dayton and has called Cincinnati home since 1982, it is hard for me to imagine the mayors of the two central cities of my life talking to each other on a regular basis, much less liking each other.

But that is exactly what we have in Cincinnati Mayor John Cranley and Dayton Mayor Nan Whaley, two second-term, Gen X Democrats who have become close friends and who usually talk to each other several times a week.

"He's my forever friend,'' Whaley said of Cranley. "And he has one of the smartest political minds I have ever seen."

"We have become very close friends,'' Cranley said of his Dayton counterpart. "We both love our cities. We're both committed to making homes here for our families."

About two years ago, the two mayors became the leaders of a new organization called the Ohio Mayors Alliance, a bipartisan group of the mayors of the state's 30 largest cities, with the exception of Cleveland, where Mayor Frank Jackson, also a Democrat, has stayed away from the alliance.

"The cities are the economic engines of this state,'' Cranley said. "We've had years of a governor and a legislature leading an all-out assault on local governments. I didn't see any sustained lobbying effort to stop them. The Ohio Mayors Alliance can fill that void."

Two years ago, the mayors of Cincinnati and Dayton began holding regular lunch meetings, often in Cincinnati, with mayors from Kettering and Findlay – Don Patterson and Lydia Mihalik – to discuss the Alliance and set an agenda.

To some who know the history of Ohio, the mayors of Dayton and Cincinnati may seem to be odd partners in such a venture.

There was a time, not very long ago, when Cincinnati and Dayton stared warily at each other down about 55 miles of asphalt called Interstate 75.

One was an old river city that had grown with a diversified economy that ran from sausages to soap to jet engines, and seemed – if not immune – at least insulated against the periodic downturns of the U.S. economy.

On the other hand was Dayton, another river city – this one on the Great Miami River – that prided itself as the home of Wilbur and Orville Wright and the true "birthplace of aviation." But Dayton never had quite the economic force field that its bigger sister to the south had.

When I was a kid in Dayton, it seemed like bread-winners in our neighborhood had a job in one of three places: the National Cash Register Co., Frigidaire or Wright-Patterson Air Force base.

Today, only the air force base remains.

And Dayton has had its boom and bust cycles over the years. Now, the Dayton area is clearly on the rebound, with new companies coming in to take the place of the old standbys. CareSource, the health insurance company, has its headquarters in Dayton and has brought 4,000 jobs to the area in recent years.

But the friendship that has developed between Whaley and Cranley has made them both see that the two Ohio cities are indivisibly bound together – all you have to do is drive from one city to the other on Interstate 75 and you will see what used to be long stretches of farmland developed into housing tracts, hospitals, industrial parks and retail centers.

It is like one great urban-suburban area stretching from the Ohio River to Interstate 70 north of Dayton.

There are many local officials in both cities who believe that after the 2020 U.S. Census, Cincinnati and Dayton will be declared by the Census Bureau a combined metropolitan statistical area, much like the Cleveland-Akron-Canton area is.

That could make it easier for the region to receive financial help from the federal government, the mayors say.

After eight years of seeing Gov. John Kasich's administration and the Republican legislation slice the state's Local Government Fund, the mayors' alliance has a fresh start with the administration of the new Republican governor, Mike DeWine, coming into office this month.

Whaley said she doesn't think there is any chance that cuts to the Local Government Fund are going to be restored, but she believes the mayors can influence the new administration on other issues.

On Dec. 6, the mayors' alliance met in Columbus with Gov.-elect DeWine and his lieutenant governor-elect, Jon Husted, to discuss the group's priorities. 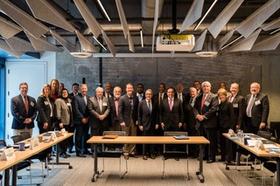 "We have to re-educate the state legislature, who have thought of cities as welfare states in the past,'' Cranley said. "Are we welfare states? No, we are net donors to the state. We're the ones who are donating to the communities in need."

The measure Cranley said he wanted to deliver to the incoming governor was a simple one.

"My message was, if you want to help, just get out of the way,'' Cranley said. "If you stop hurting us, we'll all look good. If you want to look great, work with us."

Whaley agreed with her Cincinnati friend.

"The war on local communities in Ohio is over,'' she said.

Ohio’s cities have seen about $450 million in cuts to their local government funds under Gov. John Kasich. The Ohio Municipal League, a lobby group that represents cities, is looking forward to establishing new relationships with Governor-elect Mike DeWine and the incoming legislature.

With just over a month before he takes office, Gov.-elect Mike DeWine spoke to the leaders of the state’s 88 counties – who plan to pressure him for more funding in the upcoming budget process.

Mayors from the 30 largest cities in the state have laid out an agenda they’d like to see Ohio’s next governor and new legislature follow.