​As scientists forecast a significant algae bloom in Lake Erie this summer, environmental groups are calling for tougher government policies to reduce pollution from farms.

Listen
Listening...
/
More on the forecast 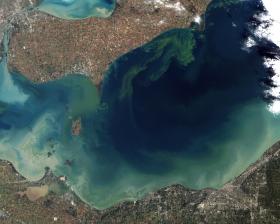 "The governments of Canada and the United States, along with Michigan, Ohio and Ontario, need to do much more to solve the problem," Nancy Goucher, manager of partnerships for Freshwater Future, said in a statement released by several environmental groups. "We're likely to continue to see devastating impacts without concerted effort by all Lake Erie jurisdictions to curb runoff pollution."

Crystal Davis, policy director for the Alliance for the Great Lakes, said the "lack of action is putting public health and drinking water at risk for millions of Americans and Canadians."

Harmful algae blooms generally begin to hit the lake in late July, and are triggered mainly by nutrient runoff from farms in the region. Toxins from the blooms can cause illnesses in people and pets.

The forecast released Thursday by the National Oceanic and Atmospheric Administration said this year's bloom could range from 6.5 to 9 on the severity index. A reading above 5 indicates a potentially harmful bloom, and the largest recorded bloom, in 2015, was 10.5 on the scale.

"This year's bloom is likely to be significantly larger than the average, approaching some of the largest blooms on record, including the one that caused the city of Toledo to issue a 'do not drink or boil' advisory in 2014," University of Michigan aquatic ecologist Don Scavia, a member of the forecast team, said in a statement.

Scientists cautioned that larger blooms may not be more toxic. The toxins in a large bloom may not be as concentrated, they said.

These blooms always produce some toxins,” says National Oceanic and Atmospheric Administration Oceanographer Rick Stumpf.  “So the scums will be a risk for swimmers, they will be a risk for pets.  But other than that, we cannot yet predict the toxicity. We’re working very hard on that across the channel.”

The algae bloom that contaminated Toledo’s drinking water was not the largest on record. Its toxicity caught the city’s water treatment plant off guard – but Stumpf says the plant will be able to handle toxic algae should it reach the water intake this summer.

Harmful algae blooms are triggered when a lot of phosphorus is carried along streams and rivers to Lake Erie.  Research has shown that most of that phosphorus comes from farms.

According to NOAA, the algae bloom will most likely appear in late July and early August.

Dave Spangler, vice president of the Lake Erie Charter Boat Captains Association, says he predicted a severe algae bloom for this season. He’s going to pay attention to satellite images to decide where to take his clients.

“We’ll direct ourselves where we’re going, to take our people out to try to avoid it,” said Spangler.

But Spangler says if the year turns out to be as big a bloom as 2015, he’ll shut down the business – even if it costs him money.

“If it get towards the 2015 area, then we’re going to have another bad year as far as financially – we’re not going to take people out.”

Environmental organizations said the forecast showed that aggressive policies are needed to stop pollution from reaching the lake.  Currently, there are only a few laws farmers must follow. "We’ve seen time and time again that these voluntary steps that they’re suggesting aren’t working," said Max Schaefer of the Ohio Environmental Council.

"We’re calling for common sense regulation on this issue."